Today in this blog we will discuss about Fusion 6.4 released by Eyeon for advanced VFX.

Image Compositing is a part of VFX or Visual Effects which can be done with Fusion 6.4.

Fusion 6.4 is the fastest compositor in the market.

This has been use for digital compositing for movies, TV series and commercials.

It was originally developed in 1987 by New York Production and Design; a visual effects company based on Sydney Australia.

First version of the software was in DOS and had little User Interface (UI) framework. 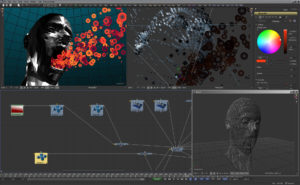 Fusion 6.4 is a node-based interface where complex processes is build up by connecting a flowchart or representation of many nodes, each of which represents a simple process such as color correction or blur.

It is available for Linux and Windows Platform.

Eyeon Fusion has been used in many Hollywood feature films like Gravity, Avatar, Noah etc.

It does not work by compiling layers on top of one another like After Effects.

Fusion 6.4 is a node based application where users can link assets together using nodes.

This working pattern can be extremely beneficial if the editor is working with 3D objects or in compositing world.

Tutorials and Resources are available on the internet to help one to find out how to apply Eyeon Fusion 6.4 into the current workflow.

Fusion 6.4 has many new features such as: 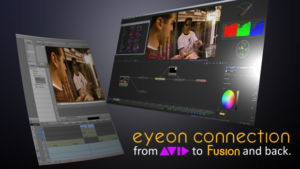 The VFX software Fusion 6.4 has a main feature of Eyeon connection for a streamlined workflow with AVID editing systems.

The editor working on the AVID Editing software can easily open the Fusion into the AVID Timeline.

This feature helps the editor in compositing images of the timeline.

The editor can work on the individual clips or layer of clips for compositing.

Artists can move from Avid to Fusion and then back to Avid.

One of the features of Fusion 6.4 is that it can load raw format files from Alexa and Phantom Cameras.

Digital Alexa Cameras are made by Arri and are used in high budget feature films, television shows and commercials.

Phantoms are high-speed video cameras which can record video at over 25, 000 frames per second.

It can display, playback, compare and adjust the color telemetry and can convert into many formats.

It is possible to mix many camera formats and achieve a consistent look in Fusion.

In Fusion’s Gamut tool ARRI color spaces have been added. 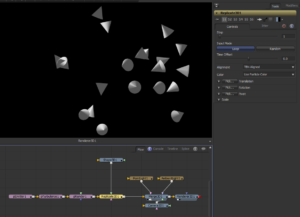 Replicate 3D is a new tool for Geometry Particles.

This is one of the most advanced and exciting developments in Fusion 6.4.

3D shapes can be replicate at the vertex positions while the mesh offers unlimited potential.

The advanced 3D and geometry particles give the desired look, shapes and texture to the objects in the Fusion platform.

This 3D tool exhibits the full set of jitter and transform options in duplicate 3D.

One can use 3D particles to simulate realistic snow or rain with physical quality of gravity and bounce.

In Fusion Particle system works in 3D this mean they can surround other elements in the scene.

Eyeon Script has LPeg, an extensive pattern-matching library for Lua.

LPeg is based on Parsing Expression Grammars (PEGs).

This is a reference manual for library.

Lua is a popular and intuitive scripting solution used by animators worldwide.

By writing scripts one can pass data back and forth between Fusion and other applications.

There are updates like DirectX view over two monitors, multi frame editing, Windows 8 compatibility and other architectural and functional updates.

In the LensDistort tool support for PFTrack lens distortion model has been added for seamless workflow with PixelFarm products.

Fusion 6.4 helps to combine various effects and motion graphics with 3D modeling and rendering into a single toolset; one can import and render 3D models with other composite in Fusion.

Fusion 6.4 is the advance software for VFX work.

Many artists from Hollywood Film Industry prefer to work with this node-based software because Fusion allows precise control over every element.

Every node has its own image processing operation.

In Fusion 6.4 nodes get connected together to create a node tree which looks like a flow chart.

Nodes make it faster and easier to create and edit complex scenes unlike confusing stacks of layers.

With Fusion artists can create entire scenes in an infinite 3D workspace.

Fusion 6.4 version allows 3D Relighting where artist can give completely new lighting effects to a shot.

Want to know more about vast toolset of Fusion then join our MAAC Kolkata Centre.