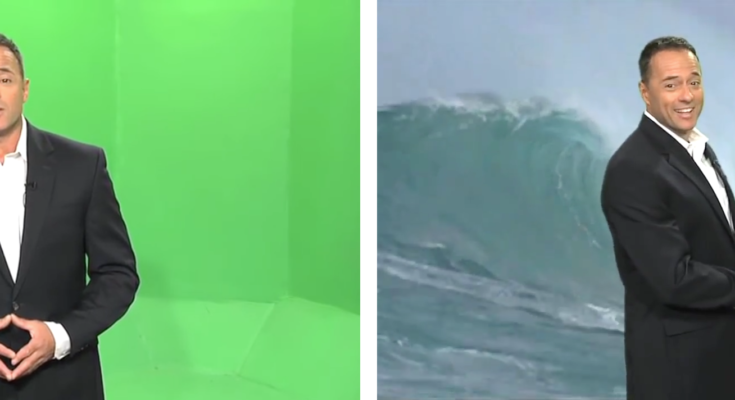 Hello Readers, today through this blog we will discuss about an exclusive Green Screen Technique developed by the famous Disney Studio.

Green Screen Keying or Chroma Keying is one of the major tasks for VFX artists during post-production stage.

In other words it is a technique for combining two images by replacing a colour in one frame with that from another frame.

This technique is widely used in audio/video medium like news-casting, motion pictures and video game industry to remove background from an image.

Chroma-Keying can be done with Blue or Green Screen; the selection of blue or green screen background depends upon the effect required and what color actor is wearing. 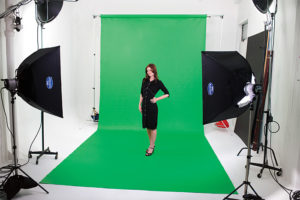 Most of the shootings now days take place in the indoor studio set ups with the green screen to cut down the production cost.

Green Screen Technique enables the director to achieve complex shots which would be impossible to capture in real scenario.

For example in the above picture; the director can easily remove the green screen from the background of the lady and insert some snow covered mountains at the back which will give the effect as if the lady is standing in chilled mountain area.

Moreover green screen technique can become expensive and herculean task if the shooting is not done in proper way. 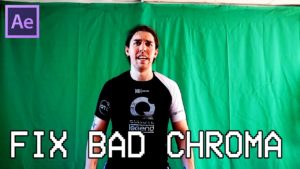 In case of above mentioned situations the compositing artist spends long time in correcting the imperfect green screen shots using various chroma removal tools like Primatte Keyer available in After Effects or IBK Keyer from Nuke.

Ultra Keyer is another tool in Fusion software to fix bad chroma.

When the character is very close to the green screen, spill issue creates on character’s edges which must be fixed.

Rotoscopy tool comes to great help to separate the actor from the background when length of green cloth is lesser than the acting area. 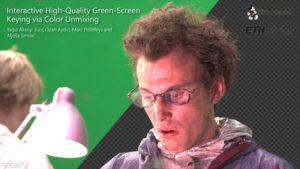 The world famous Disney Company has come up with a new technique to fix faulty chroma called Custom Keying.

Custom Keying is an advanced technical process to remove chroma or green screen without using any of the standard chroma removing software tools and third party plug-ins.

In Custom Keying various mathematical operations are achieved on color channels to rectify the green screen shots and to suppress the color spills.

In other words this is a high quality interactive green screen removal technique through color un-mixing developed by Disney Research Team. 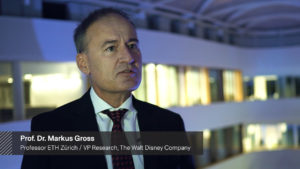 Markus Gross, Vice President at Disney Research said that “Keying is vital in adding backgrounds and objects smoothly into live-action shots. So this fast high-quality keying method will create a good impact on the production of feature films”.

The research team has already compared their output with the above mentioned standard keying software tools used in the industry and it is proved that their result is better than the other tools. 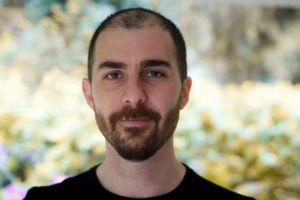 One of the scientists from research team Tunç Aydin mentioned that “Number of software tools is available in the market for compositing artist to perform keying but those tools are difficult to use for the removal of green screen background when the colors of objects mix with each other”. 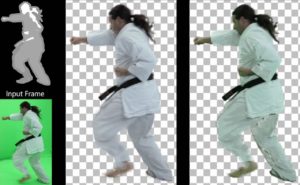 In the above picture we can see spill of green color on the extreme right white dress from the background green screen.

When the color spills on the object or mixes with each other it becomes a laborious work for the artist to correct those regions manually.

But the unmixing algorithm method is effective enough to remove color spills, as we can see the clear effect on the left white dress in the above picture.

The newly created method of color unmixing algorithm can extract the multiple color layers using a color model of the image.

The research team has developed user friendly interface that allows the artist to create a color model of the image simply by scribbling over each visible colored area of the image.

In the above image we can see scribbling has been done with red colored lines.

Here the shape of the scribble is not the factor the program only needs to identify each area of color so that it can create representation of all the colors in the scene.

The algorithm helps to figure out the underlying colors and their mixing ratios for each area.

“Unlike standard method this advanced algorithm method also has the ability to represent the image with multiple color layers rather than just foreground and background layers. Colors of objects in a scene can be changed” said scientist Tunç Aydin.

Disney’s unmixing algorithm can preserve the intricate details in the keying method.

Unmixing algorithm can also be used to generate multi-layered representation of images which can be used for photo re-coloring.

Through this interactive high-quality green screen keying method Disney is continuing its legacy of creativity and innovation.

Get more information on Green Screen Keying Technique and be a part of the charismatic world of creativity holding the hand of Animation Kolkata the best animation institute in heart of Kolkata.