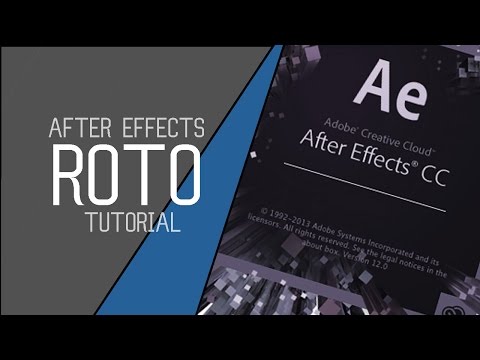 Today in this blog we will study about when After Effect’s Roto Brush Tool can be used.

Rotoscoping is a process of tracing and isolation objects within an image.

It is a laborious work because here one needs to create a matte for every individual frame.

To rotoscope one second of video, one would need to do 24 to 30 mattes depending on frames-per-second and each and every matte should match the movement of the isolating object.

Fortunately Adobe After Effects has come up with a wonderful Roto Brush Tool to make the task of rotoscoping easy and simple.

With the new Adobe After Effects Roto Brush Tool one can do many ventures.

Roro Brush Tool will allow to brush over the area one would want to select, with easy roto brush tool one can add or remove from the selection.

But the difference is that with rotoscoping one is working on the abundance of images rather than one. 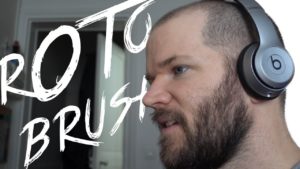 Adobe After Effects is a digital visual effects software developed by Adobe Systems.

It is widely used in post-production stage in filmmaking and television productions.

Roto Brush Tool is a tool which comes inside Adobe After Effects along with other tools.

Roto Brush Tool is a great help in case of visual effects and compositing.

The VFX artist can make use of this tool to the fullest.

Roto helps to create a matte that separate an object from its background and then one can change the background or can apply effects to the foreground.

Before working on rotoscoping; artist should study the footage carefully.

By studying the footage artist would be able to determine timeframe for the project.

Artist should have the clear view in mind about which section of the image he/she want to rotoscope.

Making A Selection With The Roto Brush Tool

Roto Brush Tool is used to draw line strokes on the indicative areas of the foreground and background elements.

After Effects uses the line strokes information to create a separate boundary between the foreground and background sections.

As Rotoscoping allows separating the subject from a background, it proves to be a great help when subject is not shot with green or blue screen; one can easily separate the subject using After Effects Roto Tool.

Once the subject is separate one can make adjustments to the subject like colour correction, changing the background, animated transitions and many more.

After Effects will by itself introduce matte for the next 24 frames which will allow one to work at a sufficient pace of one second at a time.

After Effects makes use of each brush strokes to improve the results on nearby frames.

In case the subject changes shape from one frame to the next, the divided boundary created by the roto brush tool will adapts to match the subject.

Once the first selection is complete, it will serve you as base frame. 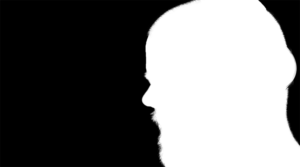 After Effects provides its users different view options to see the selection.

One can see the alpha option as black and white boundary or as a covering.

One can also see an X-ray view of edge selections.

Rotoscoping as VFX tool is used in almost every movie and television shows.

In case of feature film rotoscoping process may take hours or days to complete.

Rotoscoping is an art form so mastering it will need time, patience and skills. 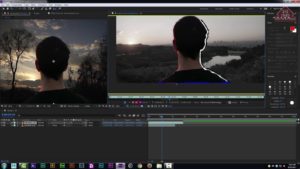 In the above picture we can see the effect of rotoscoping, in the right window box the subject is separated from the background by applying Roto brush tool.

On the left window box we can see the background image has been changed to more beautiful scenic view with sunset, clouds and trees.

The foreground subject is the same in both the pictures.

After Effects Roto Brush Tool has the ability to create complex curve lines.

Users can use Roto Brush Tool as a dragging brush tool.

The beginners can simply select the Roto Brush Tool in the toolbar and work to make the foreground bright or to darken the background.

This tool can also help to clone the people or to add text between components on screen or some other crazy visual effects.

Separating a very complicated shaped person or object with the help of Roto Tool could be very time consuming and tough job.

For example in case of two people fighting, it could be impossible to follow the actions of both the person correctly with one single selection outline. 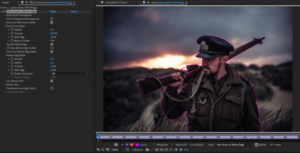 After Effects Roto Brush Tool also allows the artist to fine-tune rotoscope in a simpler environment.

After making a rough selection through Roto Tool, Refine Edge Tool should be selected and applied. 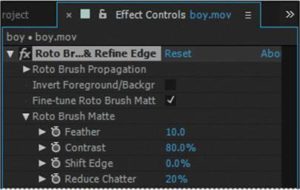 Refine Edge Tool is used to achieve a clean rotoscope along with Roto Brush Tool.

If the artist is not frequently rotoscoping the images then he/she can invest time in fine tuning the rotoscope image.

It is necessary for the VFX artist to learn the application of Roto Brush Tool and Refine Edge Tool so that he/she could work efficiently.

It is also necessary to select the motion blur in the Roto Brush Parameters, so that the edges can flow naturally if the subject has lot of motion.

After Effects Roto Brush Tool is a simple, fast and great option for clean VFX Rotoscoping rather than working on drawing and animating masks.

Previously Rotoscoping was a tedious work but now with the advent of users friendly software Rotoscoping has become fun and exciting.

Every VFX artist both professional and aspirant should learn this technique even if they are more interested to create the explosions effects.

Join and Learn more about Rotoscoping with us.