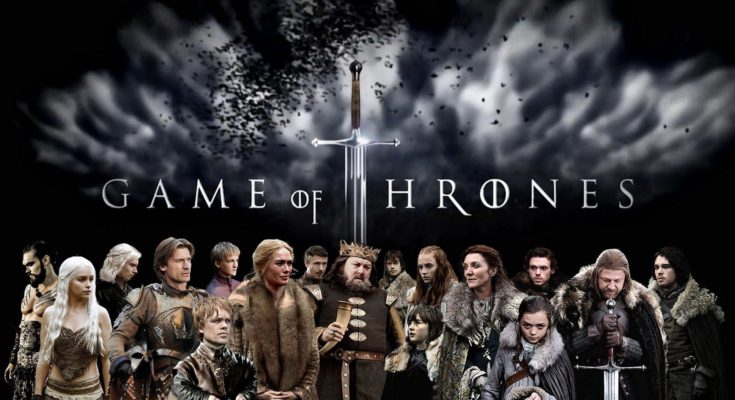 Today we will discuss mainly about the VFX Tricks that are being used in TV series Game of Thrones.

Through this blog we will take you inside an American television series called Game of Thrones created by David Benioff and D. B. Weiss.

The first episode of this series premiered on HBO in the United States on April 2011 and the final episode will telecast on April 2019.

The shooting of Game of Thrones took place in Morocco, Iceland, Ireland, Spain, Scotland and Canada along with United States.

It is set on the fictional continents of Westeros and Essos and has several plots.

Game of Thrones has a huge viewership on HBO and has wide active international admirers.

It has received awards including Hugo Awards for Best Dramatic Presentation.

VFX Secrets of Game Of Thrones 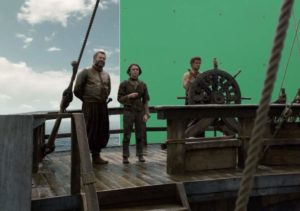 In the ninth episode of second season Battle of Blackwater Bay occurred.

It has good crazy visual effects where the ship was captured against the green backdrop.

Ship’s deck was designed and the actors were captured on the ship, later the green screen was removed to add the real background of the sea.

Battle scenes were staged on the land because of problem in shooting on water.

Most of the water scenes were captured on the land or in the man-made pool with the chroma keying and later the effect of sea were added.

VFX Company Rodeo FX created water simulations around Theon in the scene where he floats around in the aftermath. 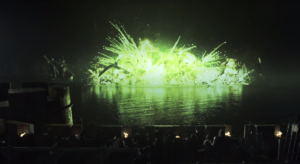 The VFX department developed catapult to fire bags of burning napalm for the wildfire explosion on water.

But later they decided to colour the regular fire green in post-production.

A flaming arrow delivered by Bronn spreads fire over the water in between Stannis’s Ship.

The computer generated fire effect was created with the contribution of Pixomondo VFX Company.

Along with fire simulation, water simulation was also used vividly in the plot of the episodes.

Fire weapons, smokes in the battle field were CG generated.

Visual effects scenes were also provided by Companies like British based Peanut FX, US based Gradient effects and Canadian based Spin VFX. 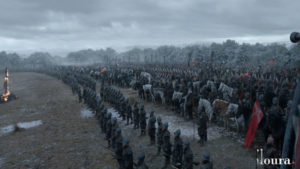 In the above picture we can see the Bolton army standing in formation.

To show the battle scene with thousand and thousand of armies CGI effect Crowd Simulation comes to great help.

Massive Software developed by Weta Digital can create crowds of digital people who can be programmed to fill a scene and move independently.

For Game of Thrones live action with main actors was shot on private land in Northern Ireland.

Rodeo FX did many of the crowd simulation, digital matte painting and animation. 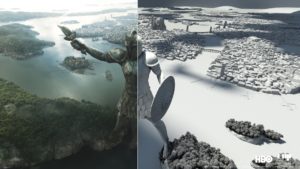 Game of Thrones has lot of relocations.

The plot follows from snowy north of Westeros to Qarth desert city.

Here Matte Paintings played an important role in establishment of the settings.

For this series artists analysed the descriptions of the castles and landscapes from the books.

Digital artist Sven Sauer with the team worked on the matte paintings to bring the Game of Thrones world to life.

With the aid of green screens, real environment and digital artistry Sauer and his team created the backdrops and environment for the live action plot.

Digital software gave appropriate texture to the castle of Harrenhal after the effect of huge fireball.

A good matte painting is always tends to be full of memories, telling stories about the past. 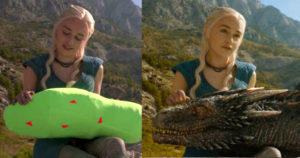 CG Dragons of this series attracted the audience most.

We can see in the picture that dragon’s head is resting on Daenerys’s lap and for that shot VFX team used green painted head representation.

Animators worked on the skin, scales, veins and every detail of dragons on 3D Max software.

Wings and muscle movements of the dragons were based on chicken.

At Pixomondo artists worked on storyboard and pre-visualizations of the scenes where Daenerys climbed on Dragon.

Kind of dragon-shaped flight simulator were used which allowed Daenerys to act against living dragon.

The team searched through the internet and collected huge images of wildlife and applied them on the designs.

Dragons had wingspan of 40 feet and breathe fire about 50 feet.

They animated the dragon and applied it to motion control camera rig.

Dragon’s flying styles was copied from bats, owls and eagles.

Even the background of the flying dragon was also CG. 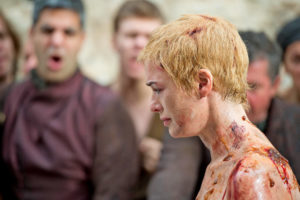 In the scene where Cersei was made to walk naked on the street as part of her punishment, the body double Rebecca Van Cleave did the shot for Lena Headley.

As Rebecca said about her experience in an interview that “I never thought that I would be in Dubrovnik surrounded by hundreds of extras and crew members throwing food at me, it was scariest and an amazing experience.”

Here we got a view about VFX tricks used in the Game of Thrones series to know more about VFX courses at Maac Kolkata just register with us.