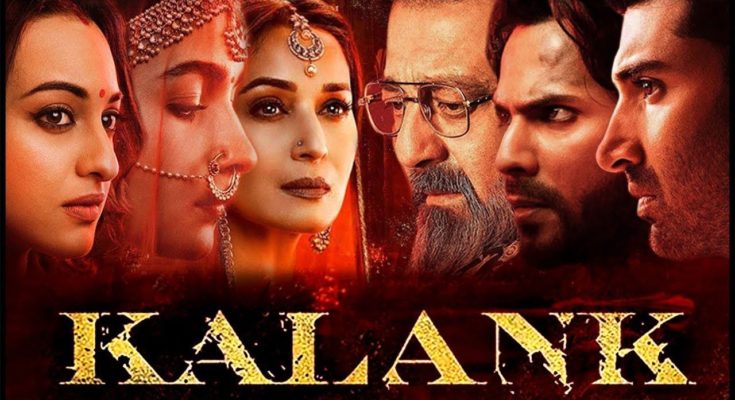 The release of multi-starrer movie Kalank in the month of April 2019 left its audience spell bound.

Here in this blog let’s take a look in the VFX rich movie Kalank.

Kalank is about a love story set in 1945 pre-independent British era.

The film was made on a budget of rupees 150 crore. 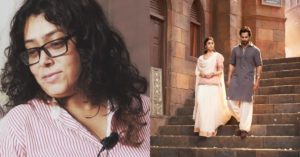 To bring the director Abhishek Varman’s imagination into reality the production team did lot of research about the set decoration to make it as authentic as possible.

The set showed the famous Hira Mandi market of Lahore.

The story line of this film follows Alia Bhatt and Varun Dhawan in the undivided India.

Amrita told that they retained the essence of Lahore City as it was in 1940s.

Amrita and her team brought back the style of architecture of that period of time.

To this grand set VFX artist added effects to enhance the scenes.

Bringing the director’s imagination into reality was a challenge for the set designer. 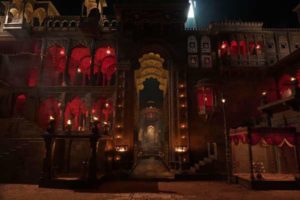 While keeping in mind the theme of the film Red colour has been used extensively in Kalank.

Red is the colour of love, passion, power and blood; it is an emotional colour and every frame of Kalank has this colour extensively.

The story of Kalank unfolds amidst the communal tensions during the partition so red is there in the plot and characters. 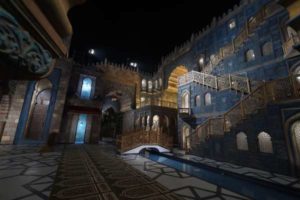 The shade of blue colour also used inside the palace which gave an amazing look to the set.

Blue canal water was matched with the colour of door and wall. 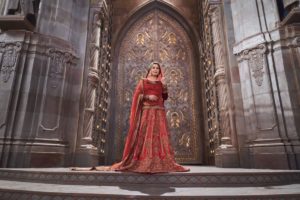 Not only the set, even the costumes, lighting and props also received various shades of red colour.

The gorgeous Madhuri Dixit in Indian authentic attire with red dupatta over her head and heavy jewellery portrayed the role of enchanting Bahaar Begum. 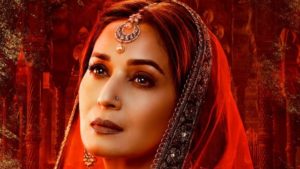 Bathed in the colour of red her eyes carried emotion of sadness and pain throughout the plot of the movie.

In fact the multi-starrer poster of Kalank with red background is mainly developed by the use of VFX.

In Kalank Alia Bhatt as Roop arrives in a dream-like town of Lahore.

From the wide range of colour palette VFX artist team selected the suitable colours to add extra spark in the visuals.

FluiidMask Studio located at Mumbai handled the VFX of this movie.

FluiidMask Studio’s VFX Supervisor shared that “Kalank has fair amount of VFX and it will be stunning.”

At FluiidMask artists worked on the colour correction of the shots to make the shots more appealing.

VFX artists gave the colour texture to the water and made the flowers more bright and colourful. 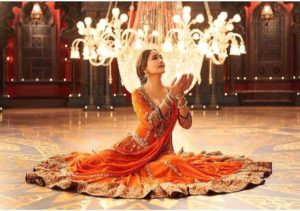 Beautifully designed lavish palace of Bahaar Begum is a visually treat for the audience.

Lighting and texture has been applied so intricately at every nook and corner of the palace that it left impressions on the viewers.

In the above image we can see the red colour shade at the background wall of the palace.

In the song ‘Tabaah Ho Gaye’ one can find her performing her trademark pose in anarkali suit. 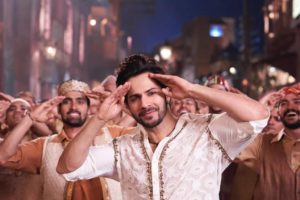 Shot at the Hira Mandi set, this song showed the narrow streets, brick staircases and houses of 1940s period.

Varun performed all the stunts himself under the guidance of action director Sham Kaushal Ji.

The actor went through rigorous physical training to make the body needed for the script.

The character Zafar is someone who flirts with life and danger.

The bull-fight sequence surrounded by audience was shot for 8 days on a hot sunny day in Mumbai.

But luckily the bull was not real, it was a CG or computer generated bull.

VFX team created the bull by using 3D model in 3d software and later added the animation to the bull for movement.

Fighting with real bull could be life risky so the CG bull was introduced in the null fight sequence.

The bull fighting arena has partly been crafted by VFX.

The back ground pillars and the broken wall structures were created with the CG tools.

The above image of Alia Bhatt with kite in the background of mountains is captured through the use of Chroma keying merged with VFX techniques.

The snow covered mountains has been inserted at the background during the post production stage.

As the film Kalank was mainly shot at the Film City Mumbai so it is quite obvious that this type of shot has been created at post production stage. 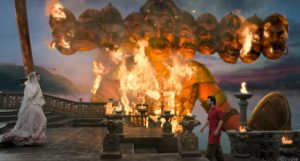 This shot too is crafted by VFX.

The grand and huge set of Hira Mandi in the heart of Mumbai is not surrounded by the mountains and river.

But in the above shot we can see river and mountains at the background.

Moreover the burning Ravan is also added with the VFX in the mid ground of the shot.

Now days fire can be generated with the use of VFX, there are software to build fire on shots so it is not necessary to use the real fire in the shooting set.

Through strong VFX Kalank’s each and every frame received colour, texture, lighting, fire and mood to highlight the emotion of the storyline.

Kalank with its rich VFX and mesmerising grand set will make a place in the heart of its audience.

Call us to know more about VFX.