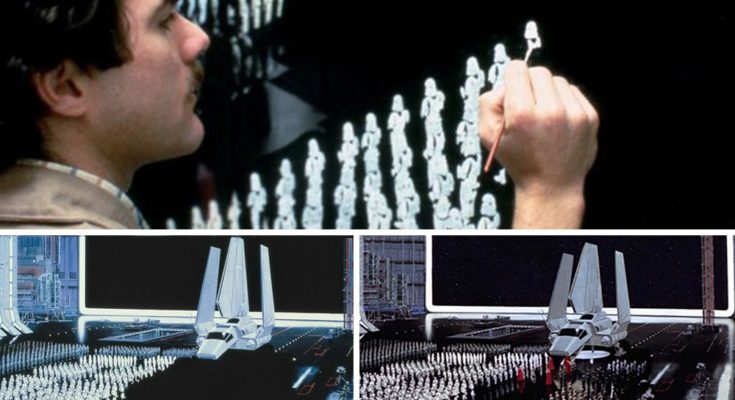 Hello viewers, today in this blog we will focus upon a Film Technique called Matte Painting.

Matte Painting is a VFX technique in which the distant locations or sets are drawn by the painters for filmmakers to create an illusion of environment that is not present at the actual filming set.

These days Matte Paintings are digitally generated with live action combined digitally but old school matte paintings used double expose of the film to make the illusion of the live action happening in the painted scene.

This technique gave freedom to the production units as not to leave the studio grounds and still creating films that amazed the audience.

One of the greatest matte painters Mark Sullivan painting this full screen shot of Sigourney Weaver’s apartment and cityscape around it from the movie Ghostbusters 2.

During early days Matte Paintings were made by artists on large sheets of glass using paints or pastels which then integrated with the live-action footage.

The painting part is static in the shot and movements are added into it through live action shot.

Filmmaker Norman Dawn made this Matte Painting technique popular in the film industry; Norman used to put black tape on a sheet of glass positioned between the camera and the scene he was shooting.

Then Norman would rewind the film and shoot a matte painting with new pictures which he wanted to include in a scene. 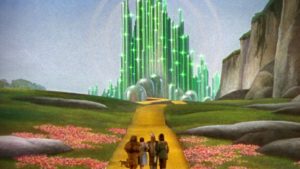 Traditional matte-painting shot from the movie includes Emerald City scene from the film The Wizard of Oz (1939). 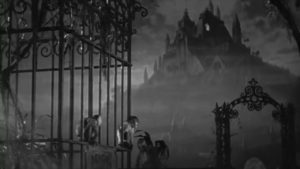 Another one is from the movie Citizen Kane (1941) Charles Foster Kane’s Xanadu.

These films used actual paintings on sheets of glass to create the illusion.

Even the most influential filmmaker Alfred Hitchcock used glass pane matte paintings throughout the 40s and 60s in hid films like North by Northwest and The Birds. 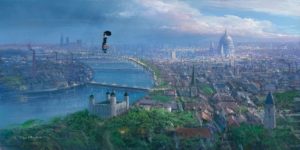 The entire background of many shots was a full frame of art and the live actors were fitted into it.

Artist Peter Ellenshaw was the main man behind creating the matte painting shots of this film. 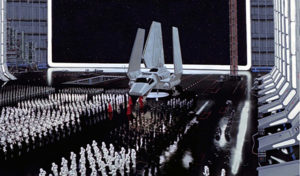 ILM also created matte painting for the Raiders of the lost Ark which took almost three months to paint all the craters and boxes. 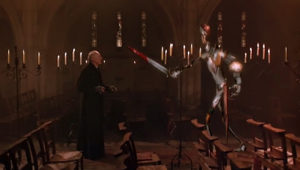 It showed CG animation of a knight leaping from a stained-glass window; Evans painted the window in acrylics and then scanned the painting into Lucas Films Pixar system for further digital corrections.

Traditional matte painting along with digital compositing was used throughout 1990s.

The last scene of an airport runway in the movie Die Hard 2 (1990) used digitally composited live-action footage with a traditional glass matte painting which was photographed and scanned into a computer.

The above Titanic shot was crafted by Christopher Evans and the last example of oil matte paintings.

Matte Painting was a standard film technique throughout 20th century which appeared in major films before digital VFX came and became the new standard. 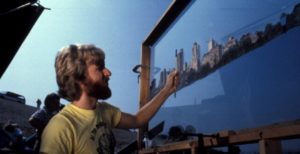 Matte Painters work under the supervision of a film’s art director.

Matte Painters are the talented and creative people behind the photo-realistic landscapes and interior or exterior environments which are impossible to get on a real film set or location.

Matte Painters are provided with a description or desired mood of the scene.

Then they create a representation of the scenery either by hand or in computer software like Photoshop or illustrator.

Finally the art director or film director approves the desired scene created by the matte painter.

Matte Painters rely on the basic brushes, getting hold of the brush tool and using it accurately is art.

Motion Picture production has now moved to blue and green screens but the traditional matte painting techniques are still applied to modern filmmaking.

Pastel drawings or actual paintings can be used as concept references or scanned into computer as a base for visual setting to be digitally altered or layered with other images to create the final setting.

Modern Matte painters use different number of digital painting techniques such as scanning photographs, images of handmade artwork, collage image and others.

This technique has provided a great opportunity to the film makers as they can add their imagination into the live-action. 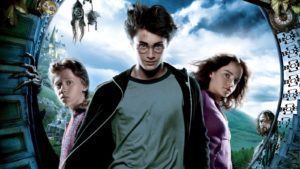 Matte Paintings are even turned into actual canvas backdrops in the film like Harry Potter and the Prisoner of Azkaban; six 100 foot canvases were stitched together and placed behind the set.

A Matte Painter need to have solid art skills to create photorealistic backgrounds for film; matte artist should have a depth knowledge regarding colour, texture, shapes and everything about art.

Knowledge about common digital art programs like Photoshop and Illustrator with 3D modeling programs are necessary in case of digital Matte painting.

Matte Painting has gone through many changes in the last century but it is still surviving as a film technique and there is a plenty of demand for talented matte painters with a vision and sense of imagination.

If you have traditional drawing and painting skills with 3D knowledge then you will be in demand in film industry as Matte Painters.

So, viewers be a part of our MAAC Centres Kolkata and explore the world of art.