The animatic that we have discussed so far, once approved and finalized by the director, goes on to the next step in the pipeline. From here the process of animation begins. 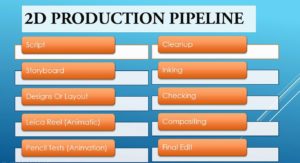 In the traditional animation process, the animators start sketching the different sequences of the character movements on special types of transparent paper, known as celluloid sheets.

Hence sometimes this process of hand drawn animation is also known as cel animation. The different panels of the storyboard are closely followed during this drawing process. 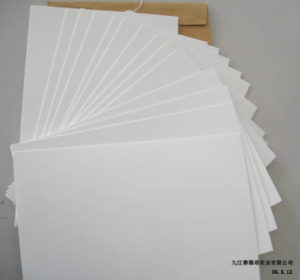 The animation desk can be a light table, which help an animator to see the previous drawings while making a sketch of a character pose.

The frames drawn by these animators must match the sound sequence exactly as and when the frame will appear or else there will be a mismatch between the visual and the soundtrack which will distract the audience. 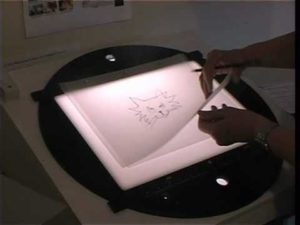 A preliminary version of the final animated scene known as the pencil test is prepared, photographed and synced with the necessary soundtracks. Once this pencil test is tested and reviewed, it is passed on to the assistant animators.

Assistant animators add more details and frames, which are missing in the scene.The work done by the assistant animators is reviewed and pencil tested, before the lead animator meets the director for the final approval. 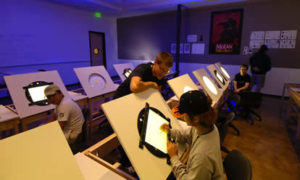 The director, producer and the other creative team members review the scene thoroughly. This is known as sweatboxing. Like in case of storyboarding an animator might have to work on a scene, a number of times before it come out perfect.

Each major character in an animated film will have a group of animators involved in drawing the different poses of that character and thereby animating it. This group consists of the lead supervising animator, some key animators and a small group of assistant animators.

In a scene where two characters interact with each other, the key animators decide which character will be leading the scene. That character is drawn and animated first. The second character is then animated to support the actions of the leading character.

After this, the animators in the cleanup department will redraw the sketches done by the assistant animators on separate sheets of paper, taking care to include all the details from the original drawings. The final animated drawings appear as if they have been drawn by the same person.

At each stage during the animation process the artwork is spliced into the Leica reel.Once all the scenes are animated the final videos are sent for editing. 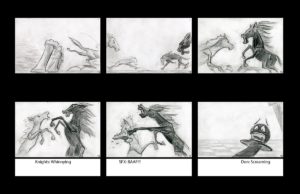 Hope this might give you a clear idea regarding the production process of 2D animation. In case you find any difficulty in understanding the above mentioned process, do comment below so that we can give you more details. This might help our readers to get a clear concept on the matter.