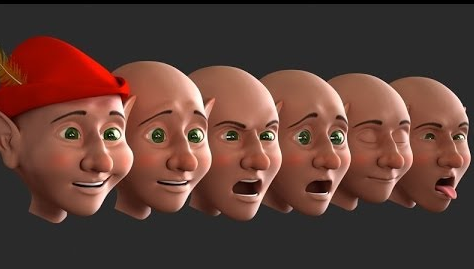 One Face so many Emotions.

Emotions like sad, happy, angry, confused can easily be expressed without voice-over or dialogues.

Thanks to the tremendous growth of digital media we have evidenced many animated feature films as well as short films till now. 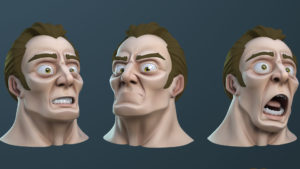 So if you ask why animated character needs facial expressions?

The answer would be because facial expression puts life into the character.

Animated character has the same role as the real actor has in a live-action movie.

Facial Expressions of animated character highlights the feelings and mood of the animated content.

Both in 2D and 3D animations faces are drawn with great care by the animators.

If an animator fails to animate a face properly then the character will look like lifeless and dull.

In 3D animation faces are modeled in three dimensional platforms.

Animator can communicate through the character by proper rigged face.

The way to select the right expression for the character is to first break down the shots.

Analyse the shot first, what is happening inside the shot? How the character is going to react about the incident?

How the emotion changes and so on.

The animator follows the breakdown of the facial actions according to the mood.

Bringing out the right facial emotion is the task of a skilled animator and thus sketching is the indispensable part of animation. 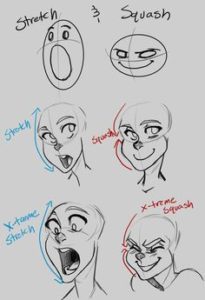 Human face is made up of many complex muscles and we stretch and squash our facial muscles to depict certain emotion.

Animators use this stretch and squash principle to bring out character’s expression.

The above picture shows the example of stretch and squash expressions.

It is an important animation technique used in all form of character animation.

At the time of facial animation, artist keeps this principle in mind. 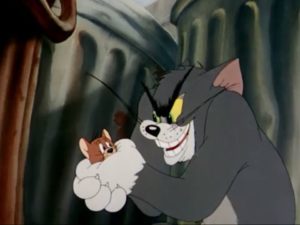 You can find the example of stretch and squash in Tom and Jerry show.

In the above image Tom’s face is lit up with impish glee.

Similarly you can find many such examples of stretch and squash in animated cartoon movies. 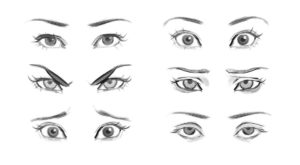 Eyes are very delicate part in the face to animate.

In the above picture we can see how eyes and eyebrows with different emotions look like.

An eye reflects every emotion and thoughts of a character.

Properly animated or crafted eyelids and eyeballs are main parts to prepare good expressions in animation.

Characteristics of a character should be in mind before animating its eyelids.

Eye animation is tricky business and one should remember that only camera view matters in this area.

The eyes should look focussed from the camera view. 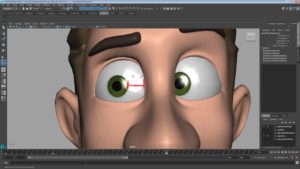 Sometimes animators need to adjust the eyes separately according to the movement of the main target.

Eye darts can be done easily in animation.

Eye darts are rapid movement of the pupils and it helps to create mood and expressions.

Hence before designing eye movement animators should become sure about the character’s emotions and thoughts.

Facial Expressions of a character makes impact upon the audiences when animator follows the basic rules and tips on facial animation.

We know that face reflects the thought of the mind and every facial reaction has its own time and space.

Expressions do not changes suddenly they need some thinking time.

For example when our mood changes from happy to sad our facial expression changes with time and in case of animated movie animator uses dialogues, music or narration to maintain the time gap between the changes of facial expressions for better output.

How long the character will hold the facial expression is something depends upon the thinking time of the character.

Animator has to give thinking time to its character for the change in expression. 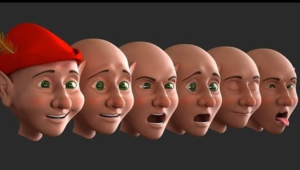 Change in emotion cannot be conveyed through single shot it needs few series of shots.

For example if a character is sad and walking down the lane and suddenly he notices his old buddy who triggers funny childhood memories and he becomes happy; there need to be some time during which character notices his friend and creates his feelings.

If a character moves from one emotion to another without thinking time the acting or scene will look abstract.

Facial Expressions is all about presentation and timing. 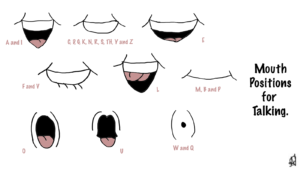 The animator has to follow scripts and story-boards properly while animating character faces.

Breakdown of the phonetics via software takes place during animation.

Animator matches the actual mouth movement with the pronunciations of the words; he/she works on the jaw movements especially how the jaw opens and closes. 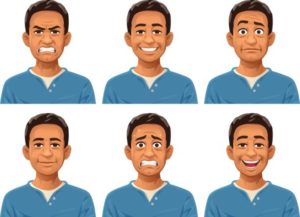 Mouth Animation is essential part of under facial expression.

Shape of mouth goes on changing from one form to another depending upon the facial expressions.

The above picture shows various shapes of mouth according to the mood of the person.

Shape of mouth changes in case of happy, anger and sad.

Know more about Animation Techniques from our well-established MAAC Centres.