In animation industry, clarity of communication is must in order to effectively tell a story & keep the audience engaged to their best. In our blog today we will discuss some advanced acting tips for aspiring animators.

In order to connect the audience with the film on an emotional level, the characters must be lively.

The character must think & move on their own, and be visually & audibly clear at the same time.

All this poses a challenge for the animator as he/she prepares to execute a shot. That is why in this post, we bring you five of the most important advanced acting tips for animators.

Every once in a while we find animators trying to push in more information than is really needed in the character.

For example, there is no need for the character to always move.

Sometimes the moments of stillness in juxtaposition to the movement can bring out the beauty of a shot.

In the shot from Ratatouille when Alfredo Linguini goes to throw away Remy in the river is a good example of how to simplify a shot.

Acting Within The Pose

The above video is also a good example of acting within the pose. In the video, the character truly uses only two poses.

The character’s level of engagement & emotional state should be the only criteria for a pose to change.

It is not necessary to schedule a pose change just because there is a new emphasis in dialogue.

Remember, it is the thought that determines action, not the dialogue itself.

Think of a character who is feeling one emotion, but it starts feeling something different because something occurred in the shot, it needs to process the thought before the change of emotion can occur.

This lag time is known as the emotional hang time, and is crucial in a shot.

In the following image beginning from time frame 2:09, watch Chef Skinner transform from one emotion to the next, with a very readable thought processing time before changing to the next emotion.

The way your character moves will tell the audience a lot about its personality.

To conjure up your character’s ‘natural pose’ it is always a good idea to take inspiration from real world characters, and then exaggerate the selected traits.

This technique has been used by every great animator, from Walt Disney to Tex Avery. 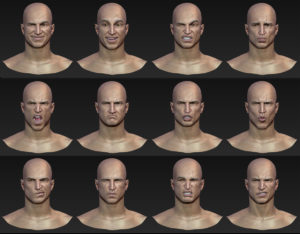 All great animators know that line of action is essential to the creation of dynamic body poses.

The emphasis of line of action, along with shoulder line & hip line, make the pose look more lively, rather than static.

It is a good idea to take some life drawing classes to learn dynamic facial posing.

Learning acting for animation is a crucial step towards building a career as an animator.

Being guided & trained by experts can make all the difference between an amateur & a professional.

Make sure that you enroll with an animation institute with a good reputation & trained faculty so that your dream of becoming an animator can become a reality.