This blog chronicles the VFX breakdown of the severe supernatural tale that archives the relationship between an aquatic merman and a lonely janitor.

The aquatic Merman is held captive in a government facility.

In this way, the story proceeds around the two.

The Shape of Water made a splatter at the Academy Awards by pulling in 13 nominations in its favour.

Throughout the movie, Visual Effects is utilized to create the various underwater scenes including the merman.

In this blog post, we are going to look at the state-of-the-art Visual Effects methods and techniques that are implemented by the production to in the movie ‘The Shape of Water’ while working significantly on the Amphibian Merman, the main character in the film.

The blog is presented by the MAAC Kolkata team so that the readers can get a brief knowledge about the VFX breakdown of the movie ‘The Shape of Water’, how the post-production is operated and how the team made efforts to reach the fairy tale love of the janitor and the Merman in the movie.

The film is an absolute masterpiece, making it a more striking achievement in the film and entertainment industry.

The movie costs less than $20 million, however, the entire technicalities recognize the film among such marvels in the film industry.

The accomplishments starting from the implausible set extension Visual Effects to the making of the Amphibian aquatic man’s facial expressions, from the effective CG to the efficient VFX breakdown, all stood marvellously.

The film indeed was a deserver of the nomination for Best Visual Effects, but the work is certainly more than commendable.

Mr. X VFX studio is of the view that every single shot of the movie where the aquatic merman can be seen is done and projected with the help of VFX.

The acting of the Amphibian is done by Doug and for the entire film; his face was hidden under foam of latex.

Mr. X is the Animation studio that is responsible for creating the face actions, movements and in addition, the movements of the eyes. 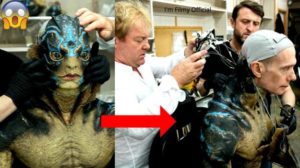 If you have watched the movie you have noticed certain areas where the amphibian was viewed swimming inside the lab’s capsule, all such sequences were responsible for the whole creature.

Here, it is to be noticed that the Visual Effects team created the merman and its actions in a way through the amalgamation of Jones’ performance and the practical effects, better than CG.

The VFX supervisor Harell wanted the scenario to be something that reasonably seemed like some foam latex and silicone prosthetics so as to make the performance plausible in the movie.

There is a big confusion that may be arising in the mind of the readers that: how the Amphibian moved? 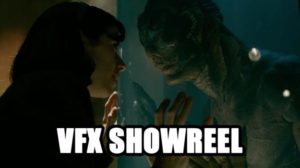 An entire of digital scanning is performed creating a Doug Jones animation rig.

This rig would have been helpful in designing a CG motion for the aquatic creature.

Whenever the designed a CG motion of the merman, they took the assistance of the rig to make the creature’s motion seem credible for an actor in costume.

It was not at all an easy task to accomplish.

At the very initial stage, Doug’s face was scanned from every angle and his actions under the prosthetic makeup were captured in minute details.

The Visual Effects team wanted their performance to be their base performance and then character remapping was done to a digital version of the creature’s face.

As a result, they scanned his face and drove him through a series of expressions.

Doug was asked to act as per the scenes and sequences and then act it out sans makeup.

Thus it will be helpful to analyze and model the facial expressions of the real-life actor and implemented to the digital computerized model they had created with the help of Visual effects and Animation.

So the team ended up with a library of expressions he created for them.

Based on the expressions of Doug, the similar expressions are implemented to the digital model.

The director prefers much capturing by the camera rather than using green screen. 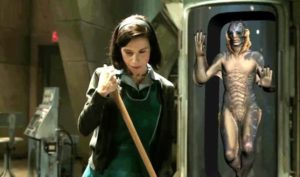 In general, every shot of the film is a blend of Doug Jones in the suit and the Visual Effects employed to it.

Let’s start from the main attraction of the merman: the eyes.

The moment as you look to the eyes of the creature, the eyes are digital.

Do you want to know the secret behind it?

The eyes in the makeup were resin plugs that fit and added to it.

The eyes were not animated and the most important thing is they don’t have any servo controls in it.

Yes, the eyes were beautiful; however, they were taken out owing to Doug’s invisibility wearing them. 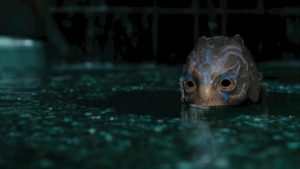 Thus the eyes were entirely created with the assistance of VFX.

What makes the Merman most outstanding is, the Amphibian’s glimmering membrane, the enchanting blinks and the micro expressions around the eyebrow, bring to the movie a new performance in front of the audience.

The suit of the Merman Amphibian is another aspect which should not be overlooked.

The suit required some bit of modification as there was bunching up which needed to be fixed effectively.

This expression was followed by a really big expression.

The sequences reached a stage where it is shown that the creature is growling at the cat in the movie: this scene is completely executed with the assistance of effective Visual Effects head.

The Visual Effects team had to make the gills flap and flutter and sometimes make the mouth open wide.

Though Doug gave the Visual Effects team the fundamental basis for the above-mentioned performance, they had to overstate and exaggerate more digitally.

We trust this blog will be beneficial to readers as they will get a concept of VFX breakdown of ‘, digital modelling, character mapping and many more.

So want to enter this world of cool effects and challenges? Just click here and register to get an expertise career advice.

319 Comments on “Effective VFX Breakdown of ‘The Shape of Water’”