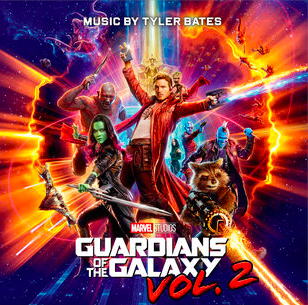 The Guardians of the galaxy series came back and smashed the box office with their VFX in second installment of the movie last year.

The pristine quality of the VFX used in the movie made sure that the various unusual characters of the movie got a firm home in the heart of the fans worldwide.

The volume 2 of the movie was more action packed and alluring than the first part.

It was more adventure and more adrenaline rush all packed in one.

The Guardians of the Galaxy is one of Marvels best projects till date because of some of the key qualities that the movie and its sequel possess.

In a nutshell, the movies with their awe striking cinematography the creation of immersive environments, very strong characters paired with a ripping soundtrack, have viewers glued to their seats.

The movie was centralized by two main characters namely the feisty genetically modified raccoon Rocket and the tree like appearing cute sidekick of his Groot.

The most crucial part of the movie crew was the VFX team as the complete brilliance of the movie lies in the creation of the earth and space like environments as the backdrop of almost every single scene.

Creation of the characters for the movie posed a large number of challenges and in order to get all the characters completely perfect the leaders of the VFX team arranged for vendors who carries out animation tests.

There were an extremely excited lot of around five vendors who did the animation tests and the different ideas that each one of the procured where finally put into one conglomeration and the film was created.

There were various brilliant examples of VFX usage in the film and some of those are:

The cute tree like sidekick of Rocket the raccoon was shot in a sequence to be dancing around unaware of the heinous battles ensuing around and no matter the seriousness of the situation in the movie.

The designers shared that it was one of their most favourite shots. 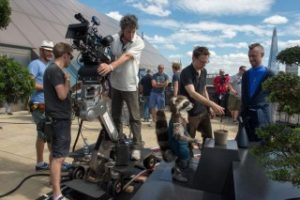 To make Groot grow up was much of a challenge as the designers had to make sure that he did not appear much elastic and malleable and neither metallic but more woody.

They could neither make Groot extremely human like not make him cartoony thus the grown up Groot was a huge challenge which they excelled in by creating human like eyes for him.

They achieved an extremely unique feat with their characters and all of this they did because of the unique, sharp and creative mind of the director James Gunn and the hard working designers of the VFX team. 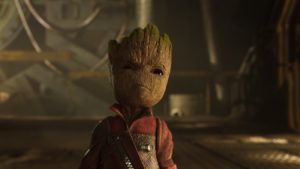 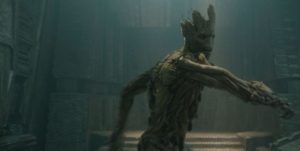 THE RETURN OF ROCKET

The Frame store company was given another chance when the character of Rocket was returned under their supervision.

They grew ecstatic about the fact that they were back as a part of Gunn’s magical universe, and imparted more than 620 shots of VFX to the film.

They paid attention to every tiny detail of the character of Rocket and analyzed his skeleton, shape of his face and other features with the idea of recreating him exactly like he was in the first movie.

The performance of Bradley Cooper was taken as reference and the lip movements of the actor were recorded so that the dialogue delivery appeared completely natural to the viewers.

All the pain was taken by the designers with only on thought in mind and that was to be able to keep a consistency in their performance.

Keeping almost everything the same about rocket he was given a makeover with slight changes here and there among which was an advanced fur simulation by making use of the new tool of Frame store the HAIRFILTERS, allowing the character to get a photorealistic finish. 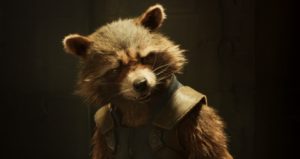 THE BATTLE WITH THE ABHILISK

The opening sequence of the movie was by far one of the toughest sequences to be shot. It was an extremely tough job to be done from a lot of perspectives.

The shots were taken constantly without any cuts and that totaled to more than 800 frame long effects on which simulation had to be run to get the final result.

The shot of the battle with the Abhilisk had the backdrop of a stormy sky above a city which was made of gold.

Since there were no camera cuts they had to engineer a complete new set of tools to create the clouds, the bolts of lightning, the passage of the lightning through the clouds, and even the lights in the town below the clouds.

The city being completely made out of gold posed a problem as it was supposed to be made to reflect everything. The Abhilisk was a gruesome eight tentacle bearing animal which gave out rainbow colored fiber like matter waves which were seen to be reflecting off the walls of the golden city and scattering on the bodies of the animals around.

The creation of the reflections of the golden city and the Abhilisk was a huge feat for the animators and VFX team. 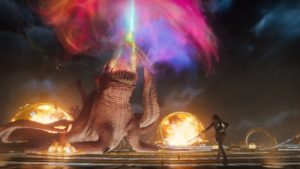 THE SPACE CHASES AND NEW WORLDS

This was one of the toughest sequences for the designers to work on for the movie because in this they had to create an environment of Quill and Rocket whizzing past meteors and the fiery ribbons of blazing plasma in a space ship.

The darting and the dodging of the spaceships were to be very fast yet they needed to appear realistic and believable to the viewers.

This made the creators devise various new ways to recreate the speeding of the space ships.

The environment had to be heavily animated to prove to be realistic and a lot of tricks were done to bring to the viewers scenes of asteroids, grits and other particles going through the lights in space. 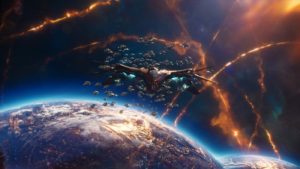 The Volume 2 of the Guardians of the Galaxy has been by far one the greatest movies in the VFX industry and was an epic journey for all the designers and the creators themselves.

The team of leaders for the first movie including the director himself had a very strong bond between them which made the second part of the movie possible and a grand success.

Gunn is an extremely precise man who exactly knows what he is doing with the world that he is trying to create and thus his coworker’s feels at ease and extremely motivated to be a part of his team.

Just enter this amazing world of VFX holding the hand of Maac Chowringhee, just click away.