In our blog today we will be discussing the mind blowing After Effects done in star wars.

Star Wars is a renowned film franchise begun by the American director George Lucas with his 1977 film of the same name.

At the time, the film became the highest-grossing in the world (and remains among the highest grosser today as well) and proved to be a landmark in terms of the stunning imagery and effects put to use.

Following the critical and commercial success of the 1977 film, there have been seven more releases (marketed as a prequel trilogy, the original trilogy, and a continuation sequel trilogy), with the eighth and ninth film in the series slated for release in the coming years.

In addition, there are several spin-off films, books, video games, comics and other media and merchandise that have established the series as an icon of popular culture.

Coming to the heart of the matter, the series is an epic space opera involving intergalactic struggles between forces of good and evil.

There are alien planets and creatures abound, as well as futuristic technology and weaponry.

Naturally, visual effects and computer generated imagery have been invaluable additions to the production process over the years, Industrial Light and Magic (ILM) has handled the visual augmentation for all the films since the beginning.

Motion graphics and rotoscopy in particular have been made simpler with digital support through software such as Adobe After Effects. 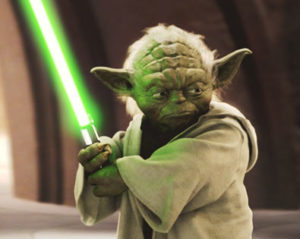 After Effects is a powerful layer-based visual effects, compositing and motion graphics tool, which is commonly used in film and television in the post-production pipeline.

It can be used for chroma keying, motion tracking, compositing as well as animation, and serves as a basic non-linear audio-visual editor and media transcoder (or in layman’s terms, converter).

It has played a role in the post-production of films like Sin City, Iron Man, and Stranger Than Fiction, and is far more widely used to create introduction title and closing credit sequences due to its very capable motion graphics creation tools.

It is also used in animation films, advertising industry and television industry.

In our discussion today, we will focus on two aspects of the Star Wars films: the introductory title sequence, and weapon effects.

The introduction sequence of the Star Wars films is one of the most recognisable elements of the franchise.

It features three parts: a static slide with the text ‘A long time ago in a galaxy far, far away…’ in blue, followed by the stylised words ‘STAR WARS’ shrinking into the frame against a star field background, which is followed by the episode number and subtitle and a (typically three paragraph) passage that delves into the back-story for the film in a prologue format.

This text crawls through the screen in a perspective view rather than the more common frontal view.

After this text crawls out of the frame, the camera tilts downwards and the film begins.

The initial release of the first film did not include the episode number, but subsequent films and the re-release did. 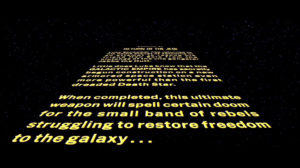 For the original trilogy (1977-1983), this title sequence was filmed using huge 2ft x 6ft models with the camera painstakingly manoeuvred to capture the scrolling effect smoothly.

The prequel trilogy (1999-2005) made use of computer generated text and imagery to achieve the same effect, making the process faster and much easier to control and modify if needed.

The original format of the title crawl was preserved, however. In subsequent years, the original films, too, were re-released with a digital version of the introductory title crawl.

The ongoing sequel trilogy, which began with the release of Star Wars: The Force Awakens in 2015, has the title crawl designed digitally like the prequel trilogy.

There are two weapons that we see throughout the series: lightsabers, and blasters.

The lightsaber, as the name suggests, is a sword-like weapon that consists of a plasma blade powered by a kyber crystal, which was emitted as a beam of light from the hilt (usually constructed out of metal or a specific type of wood).

It is used primarily by Jedis and Siths, who are users of the Force (a mystical energy form in the films) and requires a great deal of training and skill to be handled properly.

They are of different kinds, most commonly single-bladed, but also double bladed like a staff, and these blades have different colours depending on the affiliation of the user.

Blasters are more common; they are gun-like devices that fire bullets of plasma, and are typically used by the Stormtroopers, mercenaries and rebels who do not have access to the Force. 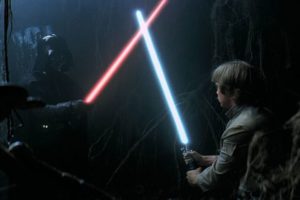 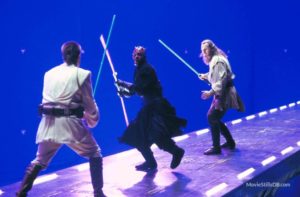 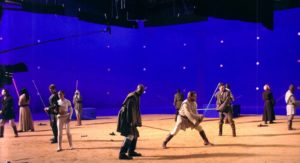 During shooting, for the original trilogy, white blades were used.

These were subsequently rotoscoped by hand and a glow and colour was added to make them distinctive: blue and green for the Jedi, and red for the Sith.

In the prequel trilogy in the later 1990s, this design process was done digitally.

With the addition of a new character in Mace Windu (played by Samuel L. Jackson), we even find a new colour of lightsaber, purple.

Software like After Effects made the rotoscopy process faster and less cumbersome than the older manual technique, allowing for creative expansion of the mythos of the series.

Lightsabers have also been seen in white and (rarer) black across other media in the franchise.

These bullet fires, too, are now created digitally and added to the live action during the compositing process.

This serves not only for faster and cost-effective production, but also reduces any potential risk of actors getting injured by malfunctioning props. 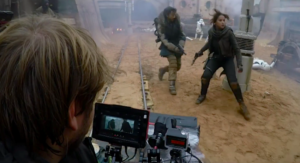 These are just a few examples of the creative power of After Effects.

If you want to learn for yourself how it can be used to create these wonderful and cool effects, do stop by your nearest Maac Kolkata centre and enrol yourself for free class and amazing career options.

For all you know, you could end up working for upcoming films in the Star Wars franchise!

118 Comments on “USE Of MINDBLOWING AFTER EFFECTS IN STAR WARS”